The Foundation for a Healthy St. Petersburg is pleased to announce two new additions to its Board of Trustees. Imam Askia Muhammad Aquil and Charles Harris were elected to the Board on March 21, 2018. The Board oversees the Foundation in St. Petersburg, which uses mission-based philanthropy to improve conditions and outcomes for underserved communities in southern Pinellas County. 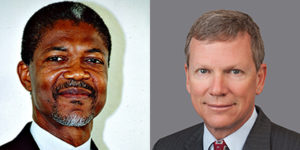 “Imam Aquil and Mr. Harris are two outstanding local leaders who will bring invaluable direction and experience to the Board of Trustees of the Foundation,” said Jonathan Ellen, M.D., Board Chair and President and Vice Dean of Johns Hopkins All Children’s Hospital. “Their contributions will strengthen the Board and connect the Foundation to communities that reflect the rich diversity of the county we serve.”

Imam Aquil is a longtime activist, social reformer and community builder and has led mosques and Islamic centers in Tampa, St. Petersburg and across the South. He is chair of the Board of Directors of the Collective Empowerment Group of the Tampa Bay Area, Inc. (CEGTBA); president/CEO of Dog Tag Heroes, Inc.; board member of the African American Business Foundation and 1st vice president of the Pinellas County Job Corps Community Relations Council Board. Imam Aquil has also served as secretary for the Hillsborough Association of Religious Leaders and a board member of the National Conference for Community and Justice (formerly the National Conference of Christians and Jews); Congregations United for Community Action; the Interdenominational Ministerial Alliance and the St. Petersburg Interfaith Association. He is the former deputy director of the St. Petersburg Housing Authority and served as the president/CEO of St. Petersburg Neighborhood Housing Services, Inc. for 11 years.

Charles Harris is a shareholder at Trenam Law and the managing shareholder of its St. Petersburg office. He concentrates his practice in commercial litigation and intellectual property litigation. Mr. Harris graduated from the University of South Florida, cum laude, with a B.S. in finance. After receiving his J.D. from Florida State University College of Law, he joined Trenam in 1992 and became a shareholder in 1999. His commitment to community includes service as board trustee for the Dali Museum (2009), former chair of the St. Petersburg Chamber of Commerce (2008) and general counsel and board member for the Pinellas Education Foundation (present). He also has received the honors of The Best Lawyers in America (Commercial Litigation, Intellectual Property Litigation) 2013-2018 and Florida Super Lawyers, 2013-2018.

Ms. Edmonds is a senior managing director at Public Resources Advisory Group, Inc. (PRAG), an independent financial and investment advisory firm. Ms. Edmonds has been managing PRAG’s Florida office since PRAG’s 2005 acquisition of Marianne Edmonds Inc., the public finance advisory firm she founded in 1997. Prior to establishing her firm, she worked as an investment banker and financial advisor to governmental issuers in Florida. Ms. Edmonds was the founding member and served as president of the Florida chapter of Women in Public Finance and has also served a three-year tenure as Municipal Advisor Representative on the Municipal Securities Rulemaking Board. During her public finance career, she has developed and implemented financing plans for a variety of sectors including government, utilities, housing, public-private partnerships and privatizations and sports facilities. Ms. Edmonds received a B.A. in mathematics from Northwestern University and an M.B.A. from the Wharton School. Ms. Edmonds is currently serving as a board member of the National Association of Municipal.

Mr. Funsch is a partner and financial advisor with the Green, Henwood and Hough Investment Group at RBC Wealth Management. His experience includes investing for foundations and pension plans at a multibillion-dollar investment firm and working as a stock analyst on Wall Street for JP Morgan Chase and as the chief financial officer for a privately-held firm in Georgia. Mr. Funsch serves on the Pinellas County Economic Development Council, St. Petersburg Area Economic Development Corporation and the St. Petersburg Chamber of Commerce. A graduate of Leadership St. Pete, he has also devoted his time to the boards of the St. Petersburg Yacht Club, St. Pete Sunrise Rotary and the St. Petersburg Museum of History. Mr. Funsch earned a bachelor’s degree in electrical engineering from Georgia Institute of Technology and his MBA (finance, accounting and economics) from the University of Chicago Booth School of Business.

“We welcome Ms. Edmonds and Mr. Funsch to the Foundation’s Investment Committee. Their combined experience and insight will strengthen the Foundation’s position and capacity to steward our resources toward our mission,” said Randall H. Russell, President and CEO of the Foundation.