Reproduced with permission by Southeastern Council of Foundations Magazine Innovations.

What if you could start over? What if your foundation could end all of its grant programs, wind down its existing relationships, reset its board, and take a completely different approach to its work? 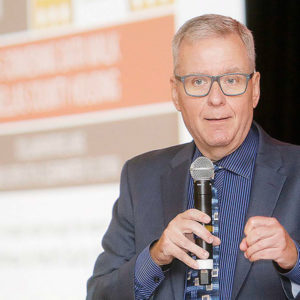 As a new foundation, the Foundation for a Healthy St. Petersburg – created in 2013 following the acquisition of Bayfront Medical Center by a for-profit health-care company – doesn’t have to worry about adhering to its past.

So rather than following the traditional foundation playbook, it’s attempting something completely different.

The $180 million foundation isn’t looking to address immediate needs. Instead, it has a much bigger goal: closing the health- equity gap in its home community, Pinellas County, Florida.

To achieve this goal, the foundation and its board have decided to play the long game. While some health legacy foundations work to help individuals gain access to better health care or focus their grantmaking around specific issues, Foundation for a Healthy St. Petersburg is instead focusing on systems change, working to address the root causes of inequity in its community.

In turn, it hopes to shape a community in which everyone – no matter their income, race, gender or neighborhood – has a fair shot at a healthy, happy life. Later this year, it will unveil a key piece of this effort – the opening of its innovative Center for Health Equity, a convening space that, by allowing multiple sectors to work together to end racist systems, will help the community develop alternatives to the structures that are influencing health in St. Petersburg.

“We’re about health equity. We’re about justice,” says Donna J. Petersen, vice-chair of the foundation’s board. “A lot of people are wondering why we aren’t helping people right now. But if we don’t take a long view, there will always be people who will need the same immediate help.”

“We need to change the systems that have barricaded those who need it the most from getting it.”

At a July 2018 event focused on the state of housing in Pinellas County, the Foundation for a Healthy St. Petersburg invited community residents, housing advocates and national experts on housing to share their ideas to improve availability and affordability. Since 2015, the foundation has interviewed more than 10,000 residents and produced five research reports on a variety of social determinants of health to establish a baseline understanding to inform investments. (Photo courtesy of the Foundation for a Healthy St. Petersburg)

A small percentage of a person’s health is determined by his or her health care. A number of other factors – things like where we live, our education, access to transportation, healthy food, and community resources – have a far greater impact. These factors are often directly linked to a person’s income, race, and gender.

Those living in poverty, LGBTQ individuals, people with disabilities, aging populations, women and other marginalized groups face a number of barriers, many of which are deeply embedded in longstanding systems, policies, and mindsets.

When Randall H. Russell became the Foundation for a Healthy St. Petersburg’s founding president and CEO in March 2015, he did so with a mandate: Help build a foundation that would work to change these systems, policies, and mindsets in Pinellas County.

Of course, untangling and rebuilding systems that have existed for decades, if not centuries, is far from a simple task.

In Pinellas County, a community of roughly 1 million people on Florida’s Gulf Coast, the task is especially challenging. The county is not only politically balkanized – two dozen municipalities lie within its borders – but also economically polarized, with an especially wide gap between rich and poor. Consider:

As it works to address health equity in a community with a wide gulf between its richest and poorest citizens, the foundation hopes its work will also support efforts to close equity gaps in other areas such as education and income.

“Our mission is health for all,” says Katurah Jenkins-Hall, the foundation’s chair. “And health equity is really a social justice issue.”

In choosing Russell as its first CEO, the foundation’s board sent a clear message that it won’t operate like a traditional health care foundation. Russell doesn’t come from philanthropy – he’s a community organizer at heart who is about bringing people together to change systems.

He began his social sector professional career in 1990 in Birmingham, Alabama, following years of work as an HIV/AIDS volunteer and activist in cities across the country. Later he founded organizations such as Healthcare Responses, the Southern AIDS Coalition, the National AIDS Housing Coalition, and the Professional Association of Social Workers in HIV/AIDS. His pioneering work in Alabama was later profiled in a book and film The Secret Epidemic: The Story of AIDS and Black America.

Now, he’s taking lessons learned about social change from those experiences to build a foundation that aims to rewire its health system.

To do that, it needs to start at the ground level, bringing people from every part of the community together to rethink its approach to health.

“For us, grantmaking is not the solution,” Russell says. “We need to change the systems that have barricaded those who need it the most from getting it.”

An early example of the foundation’s approach is its work in creating Zero Pinellas, a community-based partnership that involves local and national nonprofits and government that is working to ensure there are no new HIV infections in the county.

As part of an initial Transformational Grant program that sought to award up to $1.5 million over three years, nine different programs received funding directed at reducing the number of people diagnosed with HIV. However, this path required pre- convening work with applicants, national learning partners, and 18 months of meetings. After receiving a flurry of grant applications from nonprofits that were looking to tackle the issue independently, the foundation opted to take a different approach.

It brought leaders from these organizations together and challenged them to work together to build a strategy that would help achieve the goal, facilitating the conversations over an 18-month period. The result was a comprehensive strategy – and a bigger pot of money – that the foundation believes has a greater chance at success.

“It is not often that competitive organizations and their funders can be convinced to gather around a table and engage in a series of open conversations about working together toward a common goal,” group facilitator Stacy Orloff said in a release announcing the Zero Pinellas initiative. “And yet, that is exactly what we’ve been able to do…Their guidance and financial support, and at times, their working to hold us accountable to this facilitative process, is ultimately what enabled our success.”

The Center for Health Equity

The next big step in the foundation’s evolution comes later this year, when it unveils the Center for Health Equity – the 23,250-square-foot facility will serve as the foundation’s home but will also serve a much greater purpose.

The center will serve as a social change incubator. Focused on health equity and its social determinants, the space will ultimately bring all parts of the St. Petersburg community together to identify problems and work together to find and test solutions.

In essence, the center will serve as the physical manifestation of what the foundation aspires to be: a place that brings together government, nonprofits, companies, faith groups, neighborhood organizations, and individuals who will join together to tackle health equity.

“Community ownership happens best when the community is involved,” Russell says. “How do you involve the community? It’s by incubating ideas. How do you do that? It’s by creating a space that brings them together.”

The new facility will occupy a former supermarket that’s located in a section of south St. Petersburg designated as a community reinvestment area. Russell likens it to a business or technology incubator – a place that brings together unexpected combinations of creative people to unearth new approaches.

It can accommodate groups as large as 400 for community gatherings but can also be subdivided into a number of configurations for smaller groups. Ultimately, it will be a place that will welcome community members for informational drop-ins and networking, host educational programming, and be used as a meeting space for community leaders and experts who want to discuss problems and solutions.

“The center is designed to bring the various sectors together who have the power to change systems and help them share,” Russell says.

The foundation, she notes, is still new. And for those who have faced a lifetime of barriers, institutions are rightly viewed with a healthy dose of skepticism.

“The community is a little bit suspicious,” Jenkins-Hall says. “That will be tempered by time. If we show what we’re doing and we show that we’re consistently committed, the community will embrace it.”

That commitment to lasting change, while difficult in a world where people demand instant results, is central to the foundation’s mission.

“Our community is very rich in ideas and programs. Programs spring up all the time – and often they’re great programs – but they are not always there with longevity in mind,” Jenkins-Hall says. “They spring up and do good work for two or three years and then they’re not funded anymore. It’s given the community the perception that things don’t last.”

The Center for Health Equity is an important piece – a symbol of the foundation’s commitment to its community and its overall mission.

Now, it’s up to the board, its leaders, and the community itself to see it through – even though the results might not be immediate.

“We’re planting a tree – the fruit of which we’ll never taste,” Petersen says.